It has been a while since my husband and I last went to a concert (The last one was just after Christmas in 2007 and I was 7 months pregnant at the time). Last last night we talked some friends into watching the little scream machine that is currently masquerading as our son and headed off to The Handle Bar to see Rusted Root.

The concert was amazing. The Handle Bar is a small venue with an intimate feel. We were right up next to the stage for the entire show. 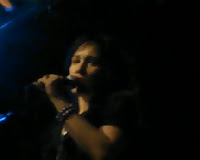 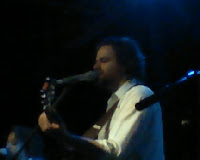 At the end of the show some of the players from STOMP joined them on stage and jammed for a little while as part of the Encore. When the show was over Michael, Patrick and Liz came down to meet with fans and sign autographs. Being the dork that I am, I purchased a t-shirt and a copy of their new album and had them signed. I also managed to get a picture with Michael but unfortunately it was with a camera phone so it is not all that great but here it is. 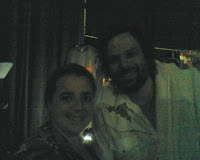