Today, I took Sebastian to his first play date. I went through his entire wardrobe to make sure he was wearing the cutest outfit he owned to enhance his boyish charms and overall handsomeness. Since the playgroup was being held just around the corner we decided to walk. Sebastian decided that he would take a little cat nap on the way so he would be refreshed when we arrived. Over the next two hours we met several moms and children from around Anderson. There were three babies there that were Sebastians age, in addition to the older children, that are his new friends. Reagan, Beverly Madeline and Sebastian had a great time sitting on the table, comparing and sharing toys, and trying to chew through water bottles. It was nice to be able to sit and talk to other moms while the kids played. After two hours Sebastian was starting to get tired and was ready for a meal and a nap so I packed him in the stroller and we headed for home. The entire way home he babbled and talked apparently trying to let me know how much fun he had. When we arrived home he ate lunch and took a much needed nap. I can't believe how fast he is growing. 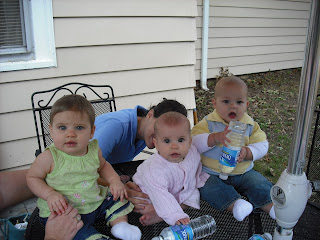 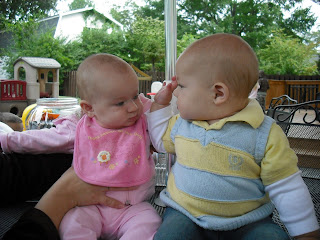 It seems you blink your eyes and they grow a year older. He is a handsome boy and that girl baby is lucky he sat down beside her.

You are going to have a heart breaker on your hands~!